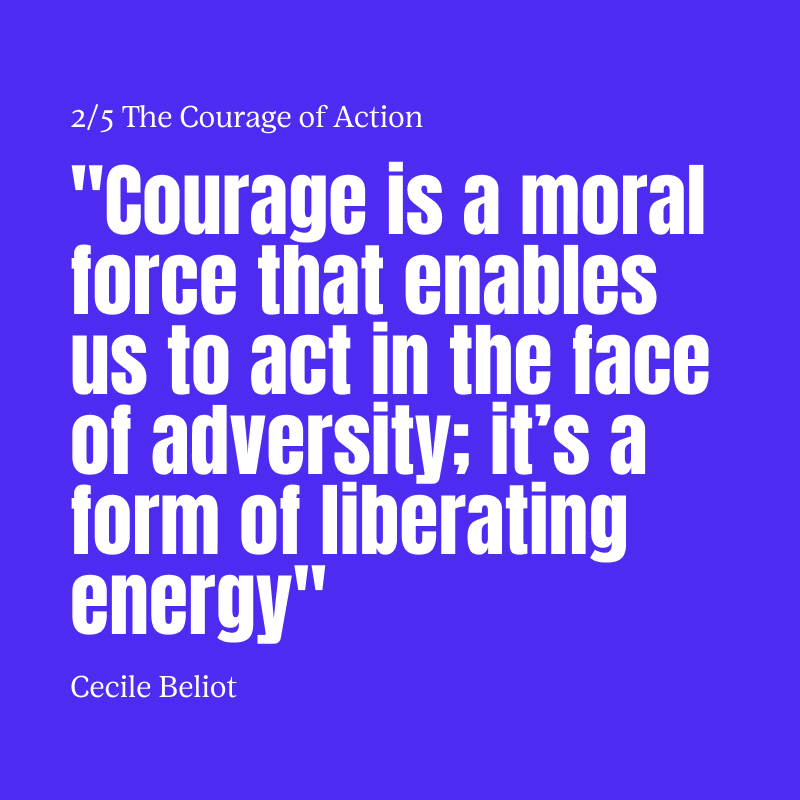 The Courage of Action

“Courage is a moral force that enables us to act in the face of adversity; it’s a form of liberating energy.”

“Proof of ‘walking the talk’ is critical: courageous acts — not just words — are what will make it possible to accelerate the transition.” – Carine Kraus, Senior Vice President, Sustainable Development at Veolia

Courage, then, is defined by a determination that allows us to understand and get behind bold ideas. It’s ideas that are transformed into action.

“Courage is undeniably rooted in action. It’s an essential characteristic of those leading transformation.”

Once the truth is brought to light, it’s time to get moving. For leaders, there is a strong imperative to act — and to do so with urgency.

→ Because firstly, there is no one coming to save us or relieve leaders of their responsibility to put in the hard work required to stave off a global environmental crisis. It’s up to us to turn things around.
“It’s important to understand that no one is coming to save us. The task is monumental and there aren’t enough hands. It’s time for us to get to work.” – Bertrand Badré, former Chief Financial Officer of the World Bank, current chairman of Blue Like an Orange Sustainable Capital, where he aims to combine performance and impact on a large scale.
“The only way to solve these challenges is for everyone to get on board,” adds Emeric Preaubert.

→ And secondly, because leaders — with their incredible influence and ability to engage and inspire — have a high potential for impact. People watch what they do, and their actions can be contagious, which makes the imperative to act even greater.
“Movements inspire engagement. Without them, we can’t move forward. This is why entrepreneurship is a form of courage in itself.” – Bris Rocher, President of the Rocher Group.
Indeed, generating buy-in and growing support for a movement can only be done through leading by example.“It’s because a leader moves forward no matter what that their team follows. Leading by example builds trust.” Cécile Beliot.

What’s more, courageous leaders take initiative, even (and perhaps most importantly) in situations where the stakes are high and the risks are great.

“Courage is doing what must be done while being aware of the consequences for yourself and others, but doing it anyway and being prepared to accept the consequences.” – Emmanuel Faber, Chair of the International Sustainability Standards Board.

But that doesn’t mean that leaders are completely without fear or that they must be. Change — especially on a large scale — can be scary. The ability to perceive and acknowledge risk is a mark of intelligence. But for leaders to drive real, systemic change, they must rise above their fear, learning to harness it as a source of energy, rather than allowing it to become a source of paralysis.

« One of the main obstacles to action is fear. As leaders, we need to replace fear with trust and cultivate it. It is more courageous to lead towards good than war. » – Satish Kumar, Thought leader peace activism

“You know what characterizes a person who has courage? Everyone is afraid, but those with courage don’t allow themselves to be paralyzed with fear — they keep moving forward. The brave harness fear to get out of their comfort zone.”

The fear of squandering an opportunity to act — and not having another one — is what has spurred many leaders into action.

“The biggest risk is to not take risks,” says Sandrine Conseiller, Managing Director of Aigle. “And, in any case, we don’t have a choice. We live in a critically decisive decade. If we want to move from immobility to action, it’s right now, not in 10 years.”
Emery Jacquillat says, “For me, fear was a lever of action. The fear of leaving a damaged world to my children, the fear of having acted too late, of not being able to escape from the irreparable consequences. The fear of being in a world where it’s too late to act.”

Unless there are concrete results to back them up, sharing intentions can lead to feelings of guilt. Action then could very well be liberation.

“Courage is a form of liberating energy.” – Cécile Beliot
“I go for it because I don’t want to have any regrets.” – Pauline Lepage, member of the association CliMates, an think tank specialized in climate change, which brings together students and young professionals.

Action is a power that both liberates and inspires.
“‘Learn to dare,’ we made it our motto. You have to push the limits — that’s what makes things really exciting.” – Eloic Peyrache, Dean and General Director at HEC Paris.

So let’s get to work.